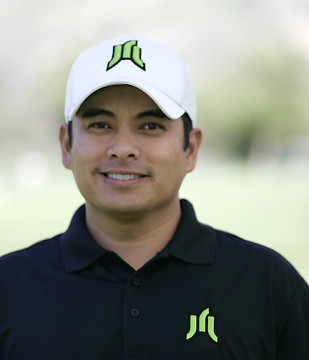 John Ray Leary is the director and founder of JRL Golf at Angeles National Golf Club. His teaching career began years ago with the assistance of many influential people in the game of golf.

In his early years playing competitive golf, John had the pleasure of working with Mr. Eddie Merrins. John Ray Leary was ranked in the world top 5 as a junior and attended the University of Southern California as a full scholarship player.

After turning professional John had Chi Chi Rodriguez take him under his wing. He caddied for Chi  and trained with him for the next four years.  This learning experience taught him how to train like the greats and learn how the greats thought, while playing championship golf.

After a reoccurring back injury shortened his playing career John sought out the best  the golf teaching community had to offer.  After years of studying, training and implementing, John has developed a unique system, which integrates technology and one’s personal feel of the swing while still adhering to the laws of physics.

John works with players of all levels, from beginners to professionals, including players from the PGA Tour such as, Kevin Stadler, the LPGA Tour’s Dorthy Delasin, and the Web.com Tour’s, Jin Park.  His teaching tenure is going on its ninth year at Angeles National Golf Club where he resides as the Director of Instruction at the JRL Golf Academy.